Mountaineering in Flip Flops and PJ's

There is a reason I walk around all day in boots and jeans, regardless of how hot it is, because the moment I get changed something happens. Typically I don't have chance to get changed again, therefore, I end up doing the task in whatever I am wearing. So, last night, everything done, boots and jeans off, Pj's and flip flops on, and relax...... yeah right!

Where I actually ended up was down the back of the mountain, calling goats like Heidi without the charm and cuteness. 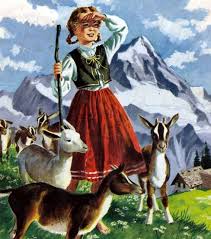 During the day the goats go off down the mountain, which is fine, as they eat the shrubs, and keep themselves amused. However, the sheep don't go with them, but yesterday they decided to venture down there. This meant when it was time to come back, they were confused. They had no idea how to get back up the mountain, and the goats were no where to be seen.

The trick with the goats is to call, no one else will do this, so the task is left to me to , now don't worry I don't stand up there going "yodel-ay-ee-oooo" although that might be more effective, I actually tend to scream, "come on" followed by "where the hell are you" and last night "get your fucking arses up here or I am leaving you out here for the hunters to shoot you"

Of course I wouldn't have done that, which is how I ended up going out of the access hole for the goats, onto a very dodgy rock, in my PJ's and flip flops to look for goats. I was not amused, and the tone of my voice, screeching indicated this. When the goats finally made an appearance, they were like kids that had broken their curfew, and they run in looking very scared.

The sheep took longer to appear, as led by Mrs B they do everything in their own way, in their own time, in their own arrogant, you want to start and we will kill you attitude. So, everyone in, and accounted for, I managed to climb back in without breaking my neck, muttering this is why I wear boots all day.
Posted by Pet Pals GC at 07:13