A lot happens in six months, and they say time is a healer, and to a point it is, however, some scars never heal. Six months ago I was being thrown around a pen by a dog that wanted to kill me. I learnt so much from that day, things that I never thought about until I was bleeding out on my stable floor. 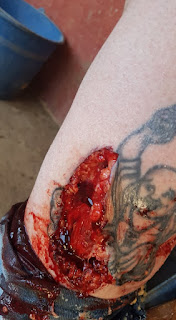 I learnt that I do bleed, that I can die, and that I'm not quite ready to go just yet. Before this I was crazy fearless, I would put myself into situations that were beyond stupid, I would face the biggest dogs, and believed that nothing would happen.

Everyday I am reminded of what happened, when I walk into the outside pen the images and memories come flooding back. As I play with the dogs, I am reminded of every moment when my head smashed against the floor, as the dog threw me from side to side. I relive the moment every day, is this healthy probably not, but it's there, and the mind is a strange thing.

My leg also reminds me of what happened, the surgeons did an incredible job, helped by the tattoo they put my leg back together. Visually it is amazing, yes I am missing part of my leg, and it looks odd, but it could have been far worse. I am also reminded of what happened by the pain.

My leg hurts all day, every day, there is no let up from the moment I get up, to the moment I go to sleep. Is it an unbearable pain, no, just a constant ache, a constant pain, Simple tasks like walking, changing gear or lifting objects intensify the pain.

So when people ask how my leg is, well its there, and it likes to remind me every day of what I put it through. Has it stopped me doing what I do, nope, I just do it slower, and with more caution.

It has been a long week for Heinz, a dog I was asked to help, he has caused me more stress, emotion, heartache, and cost than any other dog, but he is worth it. Heinz was hit by a car and left on the side of the road, the car had broken both his hips, which meant that he could not move, so he laid there to die.

What makes this even more tragic is that Heinz only has one rear leg, so he had been surviving on three legs, and his good leg, only has half a paw. When I was asked to help I did not hesitate. I collected him, took him straight to my vets, and that is where the drama started. 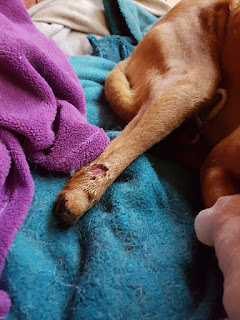 Here August is a holiday, yep the WHOLE of August meaning that my "main" vet like many other people take the whole month off. Now if he had been here on the island he would have come in and operated, but sadly he had already left, meaning Heinz and I had no surgeon. He recommended three other good surgeons, and although not happy, off I went to get him booked in elsewhere.

I soon learnt that when he recommended three it wasn't because they were good, it was because out of over 50 clinics here on the island, we only have FOUR trauma surgeons WTF!  The vet had told me Heinz needed the surgery within the first five days after the accident for it to be a success, so the race was on.

The first clinic I contacted said their surgeon was also on holiday. The second I was told I needed an appointment, and the first one was in September, when I explained how urgent the surgery was I was told  "he is just a street dog, he can wait until September"

Now, this is a phrase that makes me go from calm, to psycho in seconds, and this vet got the full psycho. How fucking dare anybody say a living breathing animal, who has the right to this surgery is "just a street dog" So after 30 minutes of me telling this vet EXACTLY what I thought of him in two languages, Heinz and I left.

I sat in my car with him and cried, I kissed his nose, and told him I was so sorry that no one wanted to help. He looked at me and wagged his tail, as if to say it was ok... humans had let him down before, why should now be different. I told him, I'm not your usual human and I wasn't giving up.

On the drive home I contacted the last clinic, a clinic I had worked with before, they said their surgeon was going on holiday in two days, and to send the xrays over, and he would see if he could fit him in. I was grateful there was a glimmer of hope, however, also I was really confused why the hell do ALL the trauma surgeons go on holiday in the same month?

The next day the clinic called, their surgeon just did not have the time to do the surgery, my heart sank. I sat with Heinz and said sorry, he was right humans were shit. I spoke to my vet and explained, he said that all we could do was see how the bones fused, and when our trauma vet was back, he would see if there was anything he could do, but Heinz would be in pain for the rest of his life, and maybe might never walk again.

I was so angry, why can this happen, I began to message everyone I know, and ask for a solution, I was not letting this dog down. A message flashed up on my phone from the last clinic, they wanted to help and said there was a mobile surgeon who went round the island doing trauma surgeries, using clinics. If I could get him to agree to do the surgery, I could use their clinic for free.

After eight hours, I tracked down his contact information, a few emails, a lot of back and forth and he agreed. Probably just wanted me to shut up, but I didn't care, on day FIVE, his last day Heinz was booked in for surgery.  In my haste I hadn't even asked how much the surgery was, but what the hell I have a credit card, and an understanding husband.

I dropped Heinz off for surgery yesterday, kissed his nose, thanked the clinic, paid the huge amount on my credit card and waited. Heinz is home now, recovering, the surgery was a success. Is it as good as my vet would have done, no but Heinz has a chance to walk again.  The "street dog" will have the chance he deserves. 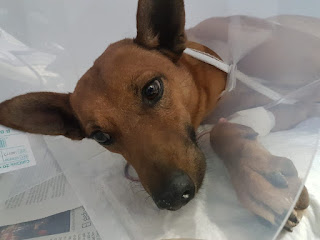 When They Want To Live

Three months ago I was brought a very sorry looking little Yorkshire Terrier, she had been found on the road, discarded like rubbish. She had no hair, was blind and deaf and looked so sorry for herself. I took her to the vet, we did bloods, and his face said it all.

Rati as she was christened by the vet was one very poorly little girl, she had kidney issues, and was really on her last legs. As I looked at this small rat like dog, I just knew she wanted to live. 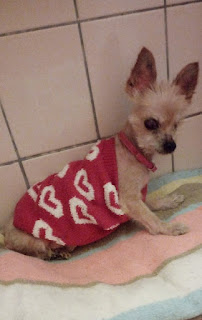 So, I told the vet I was taking her home for the weekend to see how she went, if she didn't give up, I would support this decision.

From the moment she went into recovery, Rati had a fight for life that I don't see that often, she ate like a horse, wandered around, and although she wobbled, and looked odd there was something about this little warrier. On Monday I took her back, and although the vet was impressed she had survived the weekend, his diagnosis was the same.

He told me she had weeks, and to take her home, and let her decide when she wanted to leave us. So, off I went, and Rati came into the house, as I thought well, she only has weeks, she might as well do it in comfort.

Needless to say we are now three months on, and Rati is still with us, her hair has grown back, she is a diva, trapped in a teeny body. This tiny little dog has proved that no matter what we think as humans, when they want to live they will defy everything. 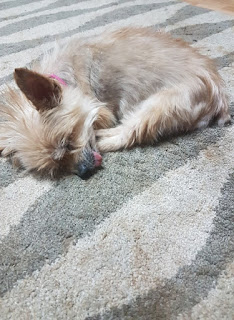