When The Injuries Are Just Too Much!

Finding a dog on the street, you have no idea what injuries it has, or had in the past so it is a bit like the lottery and you don't always win. The police brought me a dog a while ago that was scaring the local children. He was thought to have been abandoned, and was wandering the streets trying to survive, but the locals wanted him gone.

The police were called as he was big, and not the best looking dog, he had obviously had a hard life, but I did not know the full extent until we xrayed. 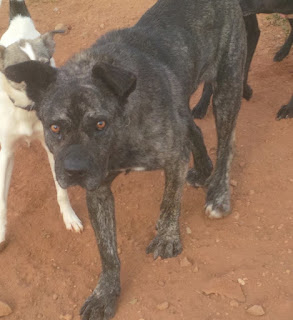 Troll as we named him, walked strange, he had several old injuries, and his jaw was out of line. He had ribs sticking out of his side, and none of his feet lined up. His breathing was deep and he struggled when he walked, a lot like a 60 a day smoker. I could honestly see why he scared small children.

Although he was a stray, he was quiet, and no trouble at all. I decided the vets needed to see this dog to determine what could be fixed, and what was wrong in detail.

Many of his injuries had been caused by trauma, so being hit by a large vehicle, and  then hit over and over. One of his ribs had snapped and punctured his lung, and was sticking out. He was also positive for all four diseases we test for, including filaria, and tick disease. The pain this dog must have been in was unthinkable, yet he never once snapped, or growled at us.

The vet thought many of his injuries were years old, and could not be fixed, his recent ones were too severe to try. Sadly there was nothing we could do, it would be like sticking a plaster on a severed artery. We made the decision to let Troll die in dignity, and not in pain, how he had survived was a miracle, but he would suffer no more. You cannot save them all, but you can help them in some way!