Why are some people so stupid that you just want to hit them with a shovel to see if it makes a difference. An English rescue contacted me yesterday to see if I could help them to get a dog over to the UK. No problem at all, I believe in working together, I knew of the dog it had been living on the patio at the pound for sometime, and my understanding was a local woman had adopted him. It seems she had asked the rescue to take, and everyone was now struggling.

So, I offered to take the dog, transport him, at a third of the cost they had been quoted, all was good, rescue happy, and then the stubborn woman dug her heals in. She hates me... well join the back of the queue this isn't about me, it is about getting a dog to its home. The dog is chipped to her, therefore, she has to agree, and was she going to was she hell.

All morning the rescue and I messaged, and both got frustrated as all they wanted to do was get the dog, and all I wanted was to help. I was due to go to the pound so I spoke to the vet there, who this woman had claimed wouldn't give me dogs! The vet agreed the dog could not stay on the patio, and they could see no problem with me taking.

EVERYONE apart from this woman saw no issue  with me helping, but still she said no. WTF is wrong with people all I care about is seeing the dog off a bloody patio and into a home, but nope she flatly refused. Usual claims of beating, starving, eating the dogs, I actually dont care anymore, it is all so pathetic.

So, the dog is now living with this woman muzzled as her dog doesnt like it, until she can arrange transport. The rescue have to pay a stupid amount of money all because this woman cannot see what is best for the dog. Oh and lovely rant on your page with your supporters slagging me off... claiming I was doing it for the money!... FACT  I was getting NOTHING.... not even petrol money, I was doing it to help a dog, its what we do! 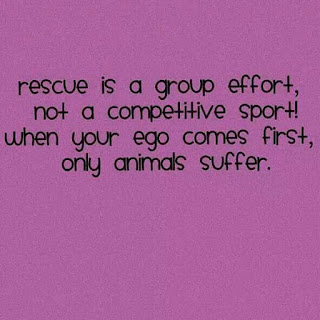