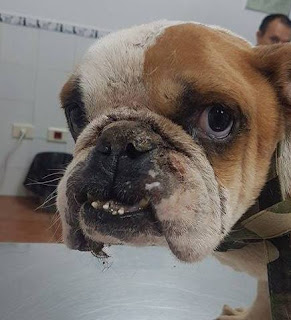 We have a British Bulldog who we saved from the pound recently, he was in poor condition, and my vet did an excellent job at dental, and we are working on his skin, however, with this breed it takes time.

One of my fosters offered to take him which was great, and then it went downhill. She had her head turned by the darkside... they convinced her that Darwin MUST go to a breed specific,

NO ONE else could help him, NO ONE knew what they were doing apart from them, he would be seen by the BEST vet in the UK , oh yeah cos mine is shit apparently.

The breed specific group messaged, and I politely declined their offer stating I was looking for a home, not another rescue. (yes I was polite) And then the foster pulled out, claiming I did not think of Darwin, and she could not foster.... the cult had her under their spell.

The breed specific people then started as they always do on FB, how I was NOT thinking of the dog, how only THEY could rehome him, and how the "joe public" should not have him. Well sorry to disappoint guys, but joe public are perfectly capable of having a breed. Maybe you should all get of your arses, and actually do some rescue work, then you would see what a real rescue does in a day!!