Mornings here are hectic as every animal wants feeding at exactly the same time, which results in a lot of barking, door kicking, and tripping over animals. When it is feed delivery day it is even more chaos. In the morning I am joined by one of my Yorkies, he runs around, and is like my shadow, which is not usually a problem. Over the years he has begun to slow down, and now he is nearing 10 he moves and responds slower.

So, the feed arrived, the guys begin unloading, shouting at the dog to move over and over, as small dogs always have the ability to trip you up. the last thing off the lorry are always the bales, as these are between 400-600KG and need to come off in one swift motion. Now over the years we have found the most effective way to do this is allow the guys to drive up the property, reserve at high speed and slam on the brakes. This causes the bale to come flying off the back and usually falls exactly where we want. As the lorry went up the property this day my husband started shouting at the dog to move, something distracted him, he stopped for a second, just as the bale impacted the ground.

All we could hear was the muffled sounds of my dog, being crushed by a huge bale, the guys ran and managed to move the bale off which had trapped him against the wall. I picked him up and knew straight away that he had broken his hip, so off I rushed to the vets. He was lucky to be alive, and I was sure he must have more damaged than just his hip.

The xrays showed a broken hip, which we hoped was an easy fix, but sadly the first attempt didn't work, and I made the decision to put him under major surgery. As with all surgery there is a risk, however, my vet is the best at what he does, and my dog needed his quality of life back. Yesterday was a day of worry, but he came through the surgery, and now has a bionic leg. Let the healing process begin, so I can be joined by him again in the mornings, as he is my shadow, and I am missing him. 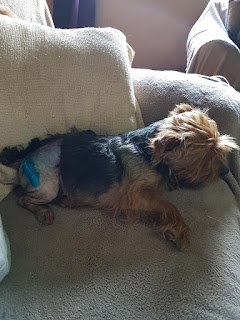