I have said it before, and I say it again, chickens are stupid, and not just a little stupid but really stupid. When people tell me how their chickens are intelligent, and funny, I ponder whether I simply got the defective ones. I have some chickens that lay and sit on eggs which is great, however, where they decide to lay is beyond belief.

In the corner I have a clean bedding pile for the dogs, this thing is huge, and in the eyes of a chicken, must look like Mount Everest. So, you would think that a chicken would stay away, oh no I have a chicken that decides down the back of Mount Everest she will lay eggs, and then sit.

Now for her making the climb to the summit every day for water, and to stretch her legs is possible. She is like the Bear Grylls of chickens, fearless but stupid. As she has not worked out that when her teeny tiny chicks are hatched, how the hell are they supposed to that climb of death.

So, eventually I hear cheeping, the day has come when proud mama appears with her brood and then gets stuck. She gets to the summit and the chicks stand at the bottom looking at her in stunned awe of her ability. There is no way in hell they can make the climb, and are even more likely to make it down the other side alive.

I know what I have to do, but I don't want to as chicken mama's are vicious, they will defend their babies with full force, and claws. This may sound like me being a wimp, as it's only a chicken I hear you say, however, have you ever been on the receiving end of a ninja chicken. 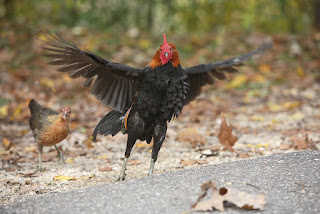 With a bin lid for protection, I maneuver around the bedding mountain and locate the chicken nuggets. One eye on mama, who is ready to kill me, and one eye on nuggets I carefully scoop them up and roll them down the mountain. Thankfully all survived, and although their descent was not pretty it was not fatal.

Mother reunited with nuggets I breathe a sigh of relief, as she wanders off through the stables, I think although stupid they are good Mum's. Oh no wait, maybe not so good, as she has just led her nuggets into Maggie's stable..... One 800KG horse, four teeny chicken nuggets this isn't going to end well.